On the weekend, we had all of my wife’s side of the family over for a belated Chinese New Year meal together.

The theme for this dinner?   Steamboat!

We don’t have steamboat very often, but it’s a family favourite.

The best way to explain what steamboat is, is that it’s like a hotpot.  We normally put out trays of various uncooked foods (sliced meats like sliced beef or chicken, balls like beef balls, fish balls, crab balls, tofu balls, etc) and each guest will put what they want into a boiling steamboat pot in the middle of the table to cook their own food.  Then you spoon it out and have it with noodles, vegies and some of the broth – sort of like a noodle soup 🙂

In Perth, one of the best (and only?) places to buy the bits and pieces for steamboat is Emma’s Yong Tau Foo shop in William Street in Northbridge.

I actually hadn’t gone in there before, always dropping Wifey out the front.  But on the weekend I ventured inside this unassuming shop.

It’s a massively packed Chinese grocery shop, and towards the back is a massive counter full of bags of balls and other goodies.  My mouth was watering just looking at all the food, and as usual, we ended up buying way too much!

Wifey had to pull me away from the Chinese New Year food display they had there too – very…  hard… to… resist..  Kueh Bankit…

If you’re not sure what to buy, I noticed they sold some combination/assorted bags if you want to try different things first.

Or just do what we do – buy a few bags of single items, eat as much as you can on the day, and chuck the rest in the freezer to have with noodles for the next few weeks 🙂

Emma’s Yong Tau Foo shop is located on the corner of William St and Newcastle St in Northbridge:  http://www.whereis.com/WA/Northbridge/317-William-St/#session=MTE=

Last year, in the midst of all the MasterChef Australia hype, our kids got really excited about invention tests.

One afternoon, Miss 10 and Miss 11 had picked a whole basket of passionfruits off the vine and experimented.

I love this – it’s all about the presentation 🙂

Did your kids get up to any nonsense in the kitchen thanks to Matt, Gary and George?

For Christmas, Little Miss 11 got a Mistral Dutch Pancake Maker!   At first I was wondering – what is a Dutch Pancake?  The machine doesn’t look like it makes Dutch Baby Pancakes which looks more like a Yorkshire Pudding, but seems to make Poffertjes – tiny pancake ball things.

In any case, baking, cooking and a sweet breakfasty treat are all the ingredients we need to try it out, so after Christmas, we did just that.

The kids had fun making the mixture and spooning it into the machine!  There was not much to it really – perhaps turning each little pancake over is the hardest step. 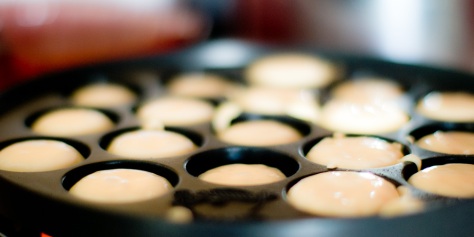 And once they were done, we had them with icing sugar, maple syrup, nutella and honey (NOT all at the same time!!!).  Even though we didn’t think we made much, we ended up with a LOT of  mini pancakes.  Too many actually!   I was starting to feel sick by the end of the batch and our family of four just couldn’t finish what we made.

Also I’m not really sure if this is how you’re meant to eat them?!  I’ll need to consult my Dutch friend at work for the real way to server this up!

So, all in all, easy to make, kid friendly, not too much mess and easy and yummy to eat!  I’m not sure where to buy the Mistral one, but there is a Princess brand for sale in Myers:  http://www.lasoo.com.au/search/princess+poffertjes+dutch+pancake+maker+492226.html

Found another Perth blogger who had a good experience with these:  http://www.thefoodpornographer.com/2010/01/30/poffertjes-dutch-mini-pancakes-test-run/

A few weeks ago, we gathered together with friends for a dinner party.

One of the highlights for the ladies and kids was trying to make Adriana Zumbo’s macaron tower. Unfortunately there were difficulties trying to assemble it, so we just had single macaron’s instead!

One thing that I can’t believe I’m missing now that MasterChef is over is the background sounds.  Being musically oriented, it used to TOTALLY BUG me when I watched the show.  The motifs used in the show to accompany the action on screen was way too recipe like *boom* *boom*.

The ones that still stick with me:

I can just imagine the musical producers for the show sitting in front of a synthesizer with all the sounds preloaded onto different keys, and then triggering them randomly based on how they feel or react to the action on screen.  What a ball of a time they’d have!

But now that so many Australians have been exposed to it and recognise the sounds, I think it’s time to capitalise on these sound bites.  Here are my two profit making ideas:

Imagine using the MasterChef sounds in your own home movie!!

Your 6 year old is about to fall off their trike, cue the timpani “boom bada boom boom boom”.  And then skip to Mum putting a band-aid on the scratch and kisses and hugs, cue the strings “it’s alright” music.   Fantastic!

If no-one does this, I’m going to!   I want the happy violin music everytime I receive a call.  I want the timpani sound for SMS’s or emails.  I want it now!!

Anyone else want to re-use these sounds?

So our family gathered around the box for the grand finale of Masterchef 2010 last night.  Although it’s not really a box, it’s more 2D like a rectangle.

The kids are already barracking for Adam.  Wifey and I have boycotted internet news or social sites so we don’t get any spoilers.  Our family is in a good mood after many laughs thanks to Ten’s new import show of Modern Family and about 10 minutes of has-been Dancing with the Stars.

First up, basic skills and knowledge.  Not good for Callum who has hardly any years of experience.  At his age, I was playing Quake and Doom, eating Chicken Treat and McDonald’s and the only kitchen and food skills I had was cooking toast and cereal!

Like a quiz show, we’re shouting answers at the TV, but neither Callum nor Adam can hear us.  Adam gets ahead.

Second, it’s the invention test three ways.   Wifey and I look at the end results and think YUM!!!  Pork belly is one of our all time favourites.  But I’m wondering if Adam really did it 3 ways?  Great ad though for a pressure cooker – I’m sure a few thousand people will run into Harvey Norman next weekend to buy one.

The judges play chicken and score them both exactly the same.  Shouldn’t Callum get more for doing peas two ways?  I’m wondering how much collusion there is between the judges outside of what we see.

Sometime around now we see the extended Director’s cut special long edition of the Perfect Italiano ad.  It brings back good memories, but it’s getting a bit old now.  It’s really clever, but not as good as the new “Old Spice” ad.  I was hoping for the grand finale they would do something totally different.

And then last up, they introduce a special guest chef Peter Gilmore who presents a desert and the girls all go, “What the?”.  Channel Ten cut to an ad break, clever cross advertising happens, I reach for the Tivo remote but realise we’ve caught up to live TV and can’t forward anymore.

Seems like Peter has created some weird egg looking desert but Miss 9 and Wifey complain that it doesn’t look as hard as the Adriano’s V8 cake.   Callum looks like he’s not quite getting it together, and loses part of his desert on the floor.  I’m thinking, “Use the 3 second rule!  Just wash it under running water!”  Hmm…

But I wonder why Peter is there – he just loiters around not doing much.  Adam cleverly uses him as a lifeline once, but does Callum?  Why isn’t Peter judging it?  I’m confused.  I wonder how much this desert is to order at his restaurant.

They present their results to the judges, but it’s not a blind taste test – something not right here.  Judges try to make Adam and Callum cry on camera again.   I urk as the judges make wonderful comments on the recipe again instead of the execution, the same way judges on So You Think You Can Dance sometimes critique the choreographer instead of the dancer.
For the announcement, they bring back all the guest chefs, including Julie.  But Miss 9 immediately notices that Adriano Zumbo is missing.  Was he miffed that one of his desert’s wasn’t used as the final test?

And then it’s all over – there is no way that Adam is going to lose, Miss 9 and Miss 11 are happy.   Gary says something about a “glittery kind of Masterchef life”.  What is that?  I don’t see Julie prancing around in a glittering ensemble?  If anything, Poh, the runner up from last year seems to have more exposure with a TV show and even an iPhone app!

And then Channel Ten makes a huge mistake – it draws the ending out WAY TOO LONG!  They should take a leaf out of So You Think You Can Dance.  Get the contestants to have last words, announce the winner, shower all with recycled newspaper or confetti, then end the show there!  Instead, they all had to repeat over and over again, “Adam, you are Australia’s Masterchef for 2010!”.   Duuuhhhhh!  You only have to say that once!

But no, it has to keep on going.  I look at the clock and it’s nearly 10PM – way beyond the kid’s sleeping time and I’m sure many families will be late for school tomorrow.  They bring their families in and more tears flow.   Adam’s Dad seems proud, but Wifey and I already have our Singlish accents on saying what’s really in his Asian mind – “Boy, don’t waste your time lah!  You are lawyer, lawyers earn good money and work guaranteed for life wannnn”.

Callum gets consolation prize at the Press Club.  No iPhone app?

One thing Wifey and I noticed missing – no thank you from Adam to the judges, other competitors, celebrity chefs, producers, etc.  Was this edited out?

Finally, Wifey and I breathe a sigh of relief.  No more Masterchef TV for a while.  Except the kids are super excited about the Junior Masterchef series coming on soon.  Channel Ten are too clever.

With the World Cup soccer finished, Tour de France over and Masterchef over, I’ll be glad for some PlayStation 3 gaming time now!

A few weeks ago, we had a steamboat dinner party.   A Chinese steamboat meal basically involves cooking a variety of little bits of food at the dinner table in hot/boiling water.   Think fish balls, beef balls, fish cakes, slices of chicken, beef, pork, etc in soup noodles with some Asian veggies.   Our kids love it!

But as usual, Wifey always ends up buying too many things from Emma’s Yong Tau Foo Seafood shop in Northbridge.   Which basically means that we have noodle soup for the next week or two!

One guy, three girls is a mashup of technology, parenting, music, photography and life in a household with two daughters and a funky Wife.

Jason lives in the beautiful laid back "dullesville" city of Perth, Australia.